Automate your voiceover production with the power of Artificial intelligence! 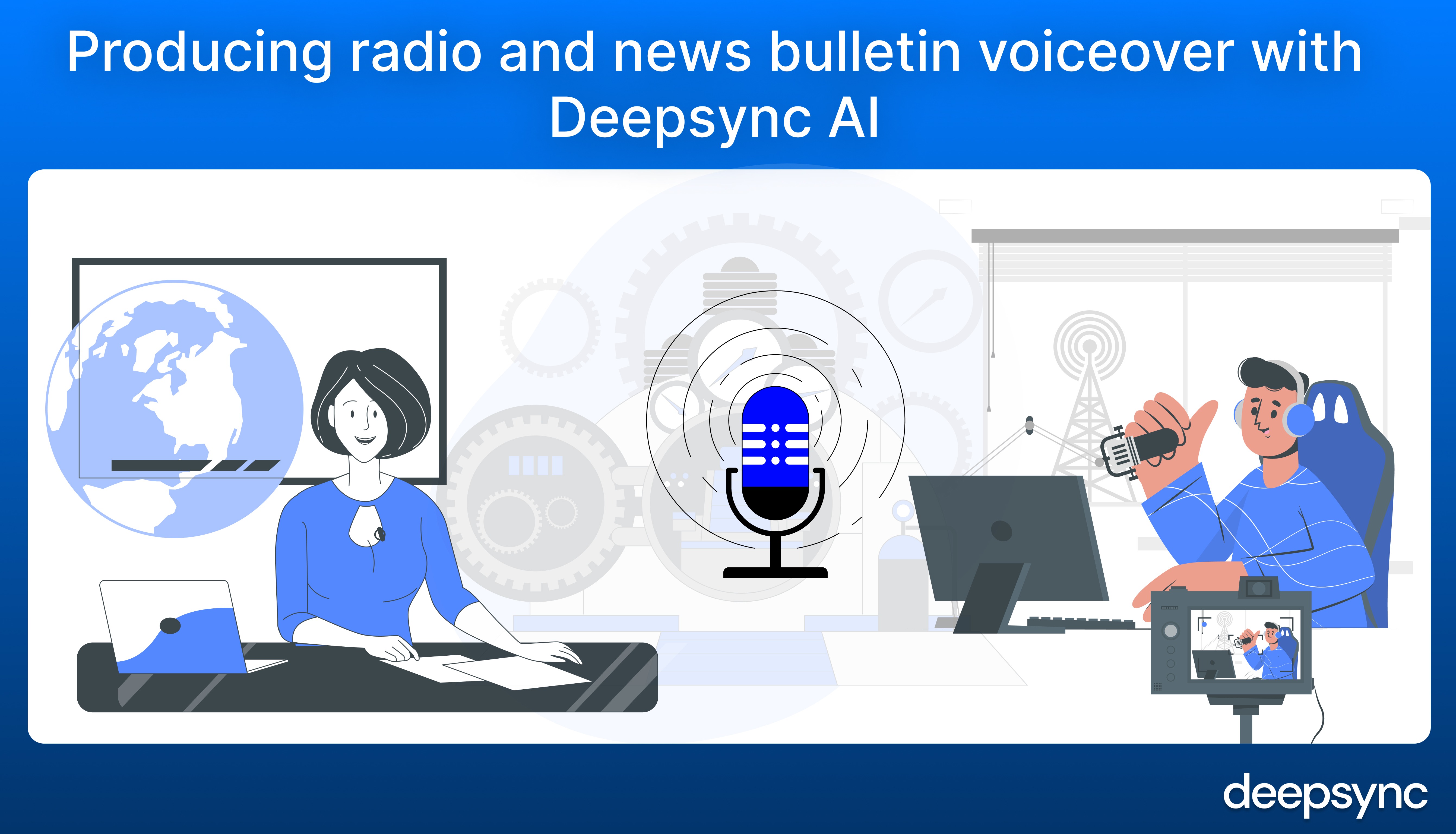 The process of producing the perfect radio and tv news bulletin is similar to preparing an enjoyable meal that leaves your audience feeling satisfied and prepared for the day ahead; what you produce must be balanced and digestible.

These fast-paced times require quick access to information, which is what radio and television news bulletins provide.

It does not matter whether you are leaving for work or returning home from work and don't want to watch too much television, but just want to find out what is going on different regional, local, or international channels. News bulletins are an excellent way to summarize what you need to know concisely!

As well, radio news bulletins also provide the necessary information while you are driving, whether it is international, local, or regional.

In addition to their short nature, small sentences, and fast-paced voiceovers, radio and television news bulletins are easily heard while multitasking.

Now let's take a closer look at how the voiceover for these news bulletins is prepared, what goes into the process, and why the current standard technical process is flawed and inefficient in today's technologically advanced world.

Why the current production process for news bulletin voiceovers is flawed?

When it comes to audio production, news media companies and radio broadcasters have a lot in common.

They both have famous journalists/hosts, news readers, and a bunch of voiceover artists who work full-time or are on a contract basis.

In this section, we will discuss two major problems, namely scaling and time. Considering that these two factors complement each other, we will also discuss other aspects of voiceover recording and production processes too.

Producing a compelling voiceover for a news bulletin to get the right pace and tone is very crucial and current traditional methods are too restrictive to get all of these things right on one recording, as a lot of editing and re-recording have to take place, which only adds to the overall production time.

Recording bulletin voiceover requires the host to be very careful about their pace, reading too fast or too slow can hamper the experience for news consumers.

News readers and hosts have a lot more big tasks to accomplish which get delayed because they are occupied with recording such voiceovers, which eats up their time too!

Recording, producing, and scaling voiceovers manually for any use case whether it is for news bulletins, social channels, or audio engagement channels cannot be done in a short time!

So far, the news and radio broadcasting industries have accepted the limitations of manual audio and voiceover production and have made peace with them.

Now imagine if your enterprise is planning to scale audio content. Do you feel the current traditional methods can help you achieve this goal?

As a member of the production and marketing departments of news and radio broadcasting organizations, do you feel that, despite the advancements in automation in other industries, the audio recording and production process still requires a heavy dependency on manual intervention?

Production by hand is one method, but it is not the only method. With the power of artificial intelligence, audio is being produced in a new manner!

Deepsync automates the audio production process for news and radio broadcast media enterprises by enabling them to produce and scale voiceover audio in real-time using the voice of their choice of host/journalist, news reader, or voiceover artist.

Learn how Deepsync makes this happen.

How Deepsync can benefit your news and radio broadcast media enterprise?

Introducing voice cloning, an innovative feature that eliminates the need to record audio.

Furthermore, audio production is automated, since the audio is directly generated from the text! There is no need to speak in front of the microphone! Scripts are converted directly into voiceover audio using the cloned voice of a well-known host/journalist and voiceover artist.

In addition, editing the audio is eliminated since no one is speaking, so there are no pauses, breaks, small noises, differences in pace, or re-recordings because the audio comes from the text.

Without sound and music, news bulletins are incomplete. Deepsync Studio offers multiple professional features, including the ability to control the vocal pitch, the speed of the audio as needed to match the sentences, and additional post-production features such as mixing and matching audio.

Multiple voiceovers can be produced in real-time at no extra cost: News and radio broadcast media enterprises can now produce multiple news bulletin voiceovers without even bothering their host/journalist, existing VO artist, or hiring a freelancer.

All you need to do is clone the required person’s voice which can be done from pre-recorded audio data of 1-3 hours or an RSS feed.

It is important to note that once your voice is cloned, your enterprise production and marketing teams can produce multiple news bulletin voiceovers for different industries and segments in just a few minutes simply by entering the script into our editor!

A voiceover can be customized in accordance with the pace, tone, and flow necessary to match the standards of the news bulletin audio once it has been produced in the host/journalist's or VO artist's voice.

The audio is produced directly through the text script, so there is no dependency, no hiring costs, no training of artists, and no rerecording or editing is required. As a result, it saves a lot of time and money!

Due to our studio features, you can easily add sound effects and background music to produce an audio output of studio quality.

With Deepsync, news, and radio broadcast media enterprises can dominate the viewership by covering news in all areas, while at the same time, providing a complete news experience for their audiences. So they don’t have to switch channels!

The production of audio news content is advancing, and adopting this new technological advancement will not only prove to be very beneficial for news and radio broadcast media enterprises in terms of scaling up their audio news content production, but will also save time and cost, and will increase productivity at the same time as well.

There is no doubt that everyone wants to dominate viewership, but the only way to achieve that is by producing enough content that keeps the consumer engaged in a loop. Using Deepsync Media Enterprises can achieve this with ease.

As a news media enterprise, do not limit yourself as a brand due to the limitations of the traditional methods, break free from the traditional constraints with Deepsync and implement automation to reign as the number one brand in your industry.