All Collections
Guides: Audio and AI
How AI Voices Can Help Improve Audio Advertising and Why it is Such a Hot Trend?

How AI Voices Can Help Improve Audio Advertising and Why it is Such a Hot Trend?

Written by Deepsync
Updated over a week ago 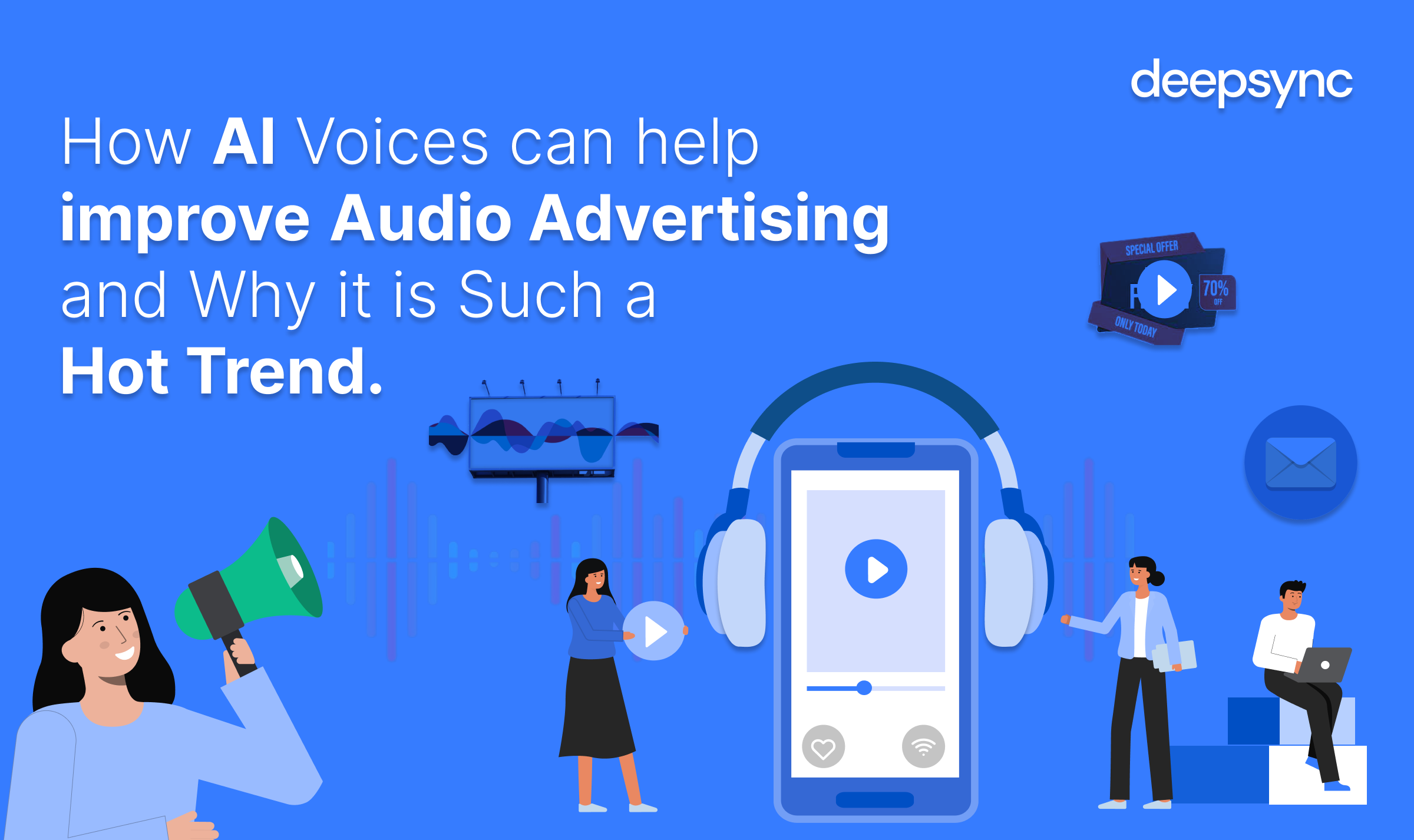 As the advertising landscape becomes more crowded, advertisers continually aim to win the audience's attention in a noisy environment. As a result, audio ads are an indispensable format for marketing because it overcomes these challenges.

Conventionally, audio advertisements have been largely static. The advertiser pays a set charge for every episode based on the expected number of listeners and then gives static audio, which is played at the beginning, middle, and end of the show.

Those who run podcasts have discovered that offering their ad copy in their voice generates unprecedented levels of engagement, much like their YouTube counterparts.

According to Spotify, 81% of listeners take some sort of action after hearing a podcast ad, and 41% trust advertisements more if they hear them during podcasts. Spotify reported $161 million in revenue from ad-supported users in Q1 2020, and that there are 199 million ad-supported listeners globally.

Approximately $2 billion will be spent on podcasts by 2023, according to market analysts.

Let's explore the benefits audio advertising can offer your business and why it is such a hot trend today.

Advertising through audio: What's happening and why it's so effective

Nearly every aspect of our lives is influenced by voice devices. Therefore, audio content has begun to compete more with the visual for activities like:

Our preference is to hear information when we are involved in such tasks so that our hands and eyes can remain free.

SoundCloud, Amazon Music, YouTube, Spotify, and Shazam are some of the most prominent audio ad platforms.

By focusing on video advertisements, many entrepreneurs overlook the importance of audio advertising. However, users are becoming tired of the screen due to the long quarantine periods. Oftentimes, people prefer listening to YouTube videos.

In other words, 2021 is no longer the time to make video ads without music branding. Furthermore, video advertising consumes more resources and, as a result, is more costly than audio advertising.

Aside from the above, audio advertising offers the following advantages:

According to Statista, 53% of listeners went on to search for more information after listening to an audio ad on a podcast. And 29% of those listeners bought the advertised service or product. 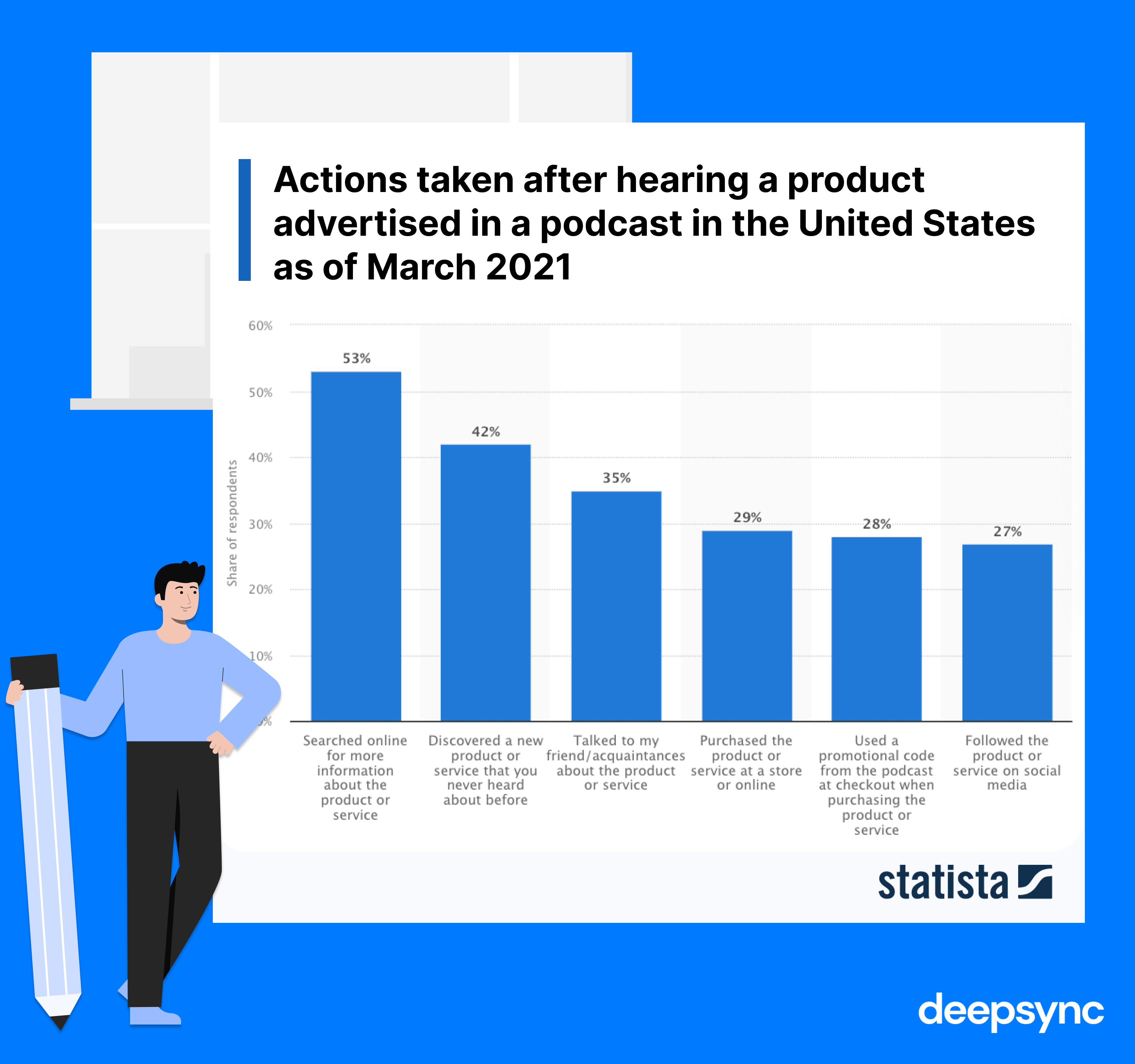 Another example of the effectiveness of audio advertising is a Google campaign with Nestle and Zenith. Paul Cocks, EMEA product strategy lead at Google, decided to test the efficacy of audio in advertisements during the campaign.

Although only around 30% of the budget was allocated to audio advertising, it accounted for 51% of the project's reach.

The question is, how can you craft an ad that will deliver such tangible outcomes to your company? Follow these tips for creating a commercial that delivers results.

Creating an audio advertisement that grabs your customer's attention is easy if you follow these two steps:

2. Choosing the right voice and being friendly is the key:

In ad production, it's important to consider various factors. Read on to learn how audio ads can become a professional product with Deepsync voice cloning AI.

As we mentioned earlier, choosing a voice that suits your ad is vital. Deepsync's voice cloning AI helps enterprises leverage their trusted host/CEO voices in advertisements by replicating their voice in high definition that sounds and feels just like the original.

With just 3-5 hours of pre-recorded audio data, an AI voice can be created in 50+ languages and 10+ accents. Which can then be used to create dynamic audio ads in regional languages, engaging users in a language they can understand and connect with.

For example, if you are an online media enterprise, you can easily clone your most popular journalist's voice and use it in ads in a language your host doesn’t even know to speak. It's like hearing an advertisement in Telugu or Malayalam coming from a known English-speaking journalist.

Creating an emotional connection with its listeners is very necessary for a brand. With Deepsync voice cloning, AI audio personalization can be done to such a great extent that engaging users and catering as per their needs becomes easy.

For example, users see personalized ads in the voice of their known host which they listen to on regular basis, and the host is addressing them to upgrade their subscription or buy something with an opening line mentioning their name.

This is also known as hyper-personalization. Yes, Deepsync can make this happen.

We live in an era of exclusivity, so be unique and different. Your competitors are already spending time and a huge amount of money on acquiring and engaging new customers. Consumers search for experiences that positively impact their lives.

Fuse your known host voice with your dynamic ads to create an emotional connection with your target audience now, schedule a demo with us here at your convenience and learn how Deepsync enhances your dynamic ads.